With 2020 just a few days away, we’ve decided to take a look back at some of the decade’s major marketing stories. Our digital, design and marketing company in Bradford has seen some massive marketing milestones over the last few years. We can’t wait to see what the 2020s have in store!

Clothing retailer Gap has had its share of controversies over the years. Back in 2010 the company made headlines when they scrapped their new logo… a few days after launching it.

Replacing the iconic white letters against a dark blue square, Gap’s new logo used a Helvetica font and offset gradient for a more modern look. According to the Guardian the redesign attracted thousands of angry Facebook comments, as well as 14,000 parodies on a dedicated website.

So what went wrong, exactly? Back in the day, AdAge brought together a team of designers to dissect the logo in more detail. Armin Vit criticised its bland, generic appearance and similarity to rival American Apparel. Jason Santa Maria, meanwhile, argued that Gap’s original logo had too much equity to introduce such drastic changes.

While redesigning a brand is certainly possible, there are many examples of companies getting it wrong. Facebook’s recent redesign proves that overhauling a brand is tricky for even the biggest companies.

Though Coke is basically ubiquitous as a brand, some of their marketing campaigns do stand out. One of their more popular efforts was their Share a Coke campaign, which put people’s names on the bottle labels for a personal touch.

The campaign first launched in Australia, and was inspired by Coke’s brand values of friendship and community. It proved so popular that it launched worldwide, with 150 popular names available. Later iterations of the campaign were similarly popular; according to Coke’s own website, 2014 saw over a thousand different names and over 150 million bottles sold.

Debranding a product like this is risky, though brands such as Cadbury’s can carry it off without too much trouble. However, it depends on an extremely strong brand for it to be effective. Coke certainly qualifies, and it’ll be interesting to see if other brands can add a personal touch going forward.

South Korean rapper Psy made history when ‘Gangnam Style’ became the first YouTube video to hit a billion views. Mixing catchy music, rapid-fire lurid imagery and some memetic dance moves, it’s not hard to see why the video exploded in the way that it did.

Another major YouTube success for 2012 was Dumb Ways to Die, a catchy safety video from Metro Trains Melbourne. It inspired a raft of imitators, as well as a WarioWare-style app on mobile devices.

Psy’s success paved the way for the rise of K-pop internationally; today, South Korean group BTS is one the world’s biggest boy bands. ‘Gangnam Style’ also had other, unexpected impacts; the video proved so popular that YouTube was forced to redesign the site’s views counter.

YouTube remains a massive cultural force in 2019, but it’s not all smooth sailing for the website. The platform faces serious problems like fickle algorithms and a toxic culture that haven’t been properly addressed. It’s far from certain that YouTube can maintain their popularity in the decade to come.

Super Bowl XLVII earned its own place in the history books when the Mercedes-Benz Superdome suffered a 22-minute power outage. The stadium was plunged into darkness, giving Oreo the chance to launch an iconic marketing move. 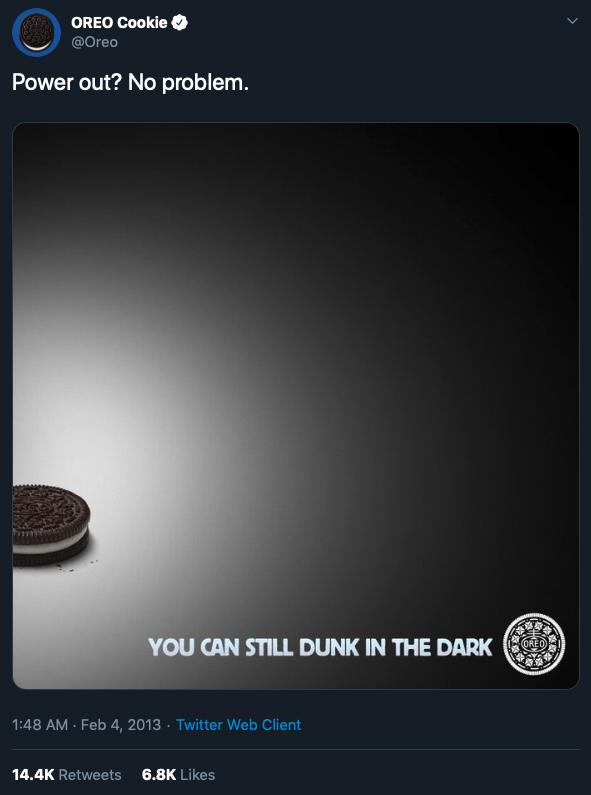 The tweet won instant acclaim for its wit and spontaneity, with massive success across both Twitter and Facebook. In reality, though, the tweet was less spontaneous than you might expect. It was actually the work of a 15-person social media team, that were standing by to respond to any scenario. In any case, it’s lived on as an excellent example of social media marketing.

Facebook made their biggest acquisition to date in 2014, when they bought messaging app WhatsApp for £11.4bn in cash and shares. The app had over 450 million monthly users when Facebook bought it, with the purchase inspired by WhatsApp’s penetration in international markets. This was something that—at the time—Facebook didn’t have in the same quantity.

Though WhatsApp made little money to begin with, it seems Facebook’s purchase was a savvy one. BuzzFeed reports that WhatsApp was on track to beat Facebook at its own game; people were sending far more messages a day on WhatsApp when compared to Facebook’s own messaging service. With only so much attention available from users, Facebook’s acquisition of WhatsApp removed a key competitor and radically improved their own services.

Nowadays, WhatsApp has over half a billion daily active users. With the rise of other services like Snapchat and Instagram, it’s clear that the ways we communicate have radically changed over the last decade.

While Always focussed on a relatively young audience, This Girl Can targeted a wider range of ages. This was because there were several different reasons women were reluctant to exercise. Many women worried about how they looked during exercise, while others felt activities like studying or looking after their families were more important.

Though these campaigns seem to have been popular and well-received, it’s still all too easy to run marketing campaigns that patronise women rather than helping them. This was a problem identified by sites back in 2015, but recent marketing blunders like Snapchat’s domestic violence ‘joke’ show it still requires a lot of thought to get right.

2016 saw a significant rise of ‘fake news’ in the media we consume. In simple terms ‘fake news’ refers to any story that’s untrue, but believable enough to have a big, real-world impact. Some (relatively) benign examples of fake news include two Russians inventing a billionaire on Instagram, and a Chinese zoo naming a gorilla ‘Harambe McHarambeface’. In other cases it’s more serious; the Guardian reports fake news was a major influence on 2016’s US elections.

Fake news spreads easily because it’s easy to mimic the look and feel of actual news stories. There are also enough true, yet outlandish stories in the news to make fake stories seem plausible. It can even have a serious business impact, as companies like Starbucks and Wetherspoons have learned to their cost.

As a result fake news remains a serious problem, with companies like Facebook reacting to it in different ways. Today’s marketers and consumers have to make sure the info they’re reading and sharing comes from reputable sources, and avoid doing serious damage in the process.

New York attraction Animal Adventure Park won some fans when they livestreamed a giraffe’s pregnancy. The New York Times reports that at its peak, the livestream attracted almost five million viewers a day. April the giraffe would go on to have more babies, though she is now retired from the park’s breeding programme.

Today, livestreaming is an extremely popular activity online. It brings plenty of attention to places like Katmai National Park, as well as celebrities like game streamer Tyler ‘Ninja’ Blevins. Livestreaming also gives wider exposure to unusual events, including a Japanese theatre adaptation of the Star Wars movies. It’s safe to say streaming has become an invaluable part of how we consume content online.

KFC’s savvy marketing proved its worth last year during February’s infamous chicken shortage. The shortage was caused by two key factors—the lack of DHL distribution centres, and the strict regulations surrounding fresh chicken transport. These complexities meant that over half of KFC’s 900 outlets were forced to close.

Instead of trying to shift the blame, KFC faced the criticism head on with a now-iconic marketing message—a tongue-in-cheek, full-page ad in Metro and The Sun. 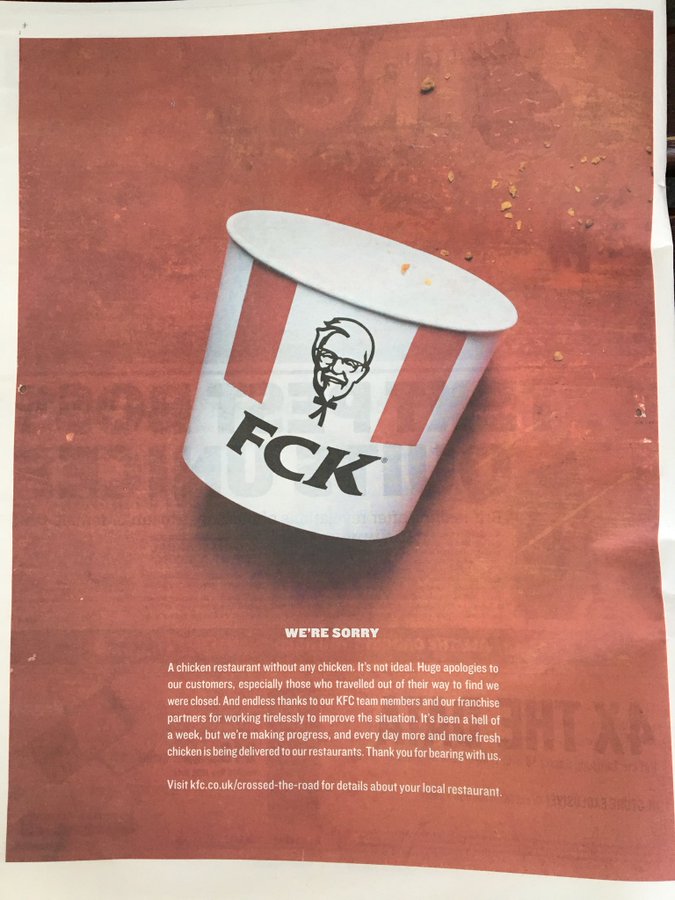 Simple, honest and very effective, KFC’s ad helped mollify legions of angry KFC fans. At the time of the ad’s launch there were over 50,000 mentions online of the shortage, alongside hashtags like #ChickenCrisis and regular abuse of KFC employees. Reportedly, the ad appearing in print also helped sell their message, since people tend to trust print messages more than digital ones.

Like the Oreo ad before it, KFC shows the value of rapid-response marketing. However, it also shows that when a business screws up, honesty is usually the best policy.

This year, superhero crossover Avengers: Endgame became the fastest movie to make $2 billion at the box office. The movie tied together plot threads from over a decade of movies, but Marvel’s on-screen universe isn’t going anywhere. Spidey sequel Spider-Man: Far From Home debuted a few months later, with a raft of new films and TV shows planned over the next few years.

Besides making astonishing amounts of money, Marvel movies created an intricate shared universe that no other movie studio has been able to mimic. The movies have also popularised some of Marvel’s less popular characters. Before the movies, fan favourites like Iron Man tended to play second fiddle to other heroes.

Not everyone’s happy with Marvel’s ascendancy in the box office. Legendary director Martin Scorsese made headlines when he compared today’s superhero movies to theme parks. Their success also reflects Disney’s wider domination of the cultural landscape; earlier this year, the behemoth acquired 20th Century Fox. This gave it the rights to a host of properties, including classic shows such as The Simpsons.

New Marvel content on Disney+ means Marvel will be a key part of our culture for a long time. Whether Marvel can push back against franchise fatigue is another question altogether.

An Exciting Decade Ahead

As you can see there are some key marketing lessons from the last decade. A savvy marketing team is always a great idea, as is being honest about your mistakes. At the same time, we must make sure we don’t patronise people with our campaign ideas.

That’s why it’s handy to have a team of expert marketers working as an extension of your business. A savvy marketing team ensures you have a good sounding board for your marketing plans. They can also help you consider all marketing channels, even ones we might have overlooked in the past. This also ensures you don’t miss the chance to use new channels in the future.

If you’re looking for some marketing help in the new decade, we at Electric are here to help! Our digital, design and marketing company in Bradford has a fantastic range of services that help you get the best from your business. We can build beautiful websites from the ground up, help you to thrive on social media and create exciting brands for your products. We can also develop your marketing strategy, use SEO and PPC to increase traffic to your website, and even produce quality print materials.